The underlying primitive predicates set_global/2 and get_global/2 defined in the next section maintain a uniform global association list. This has the disadvantage that as the number of distint associations to be maintained grows, the performance of both set_global/2 and get_global/2 will degrade. The facility described in this section avoids this problem by providing individual global variables which are accessed by programmer-specified unary predicates; hence this mechanism is said to provide ‘named global variables.’

This predicate creates a single (primitive) global variable (see the next section), together with predicates for setting and retrieving its value. If Name is either an atom or a Prolog string (list of ASCII codes), the call

allocates a primitive global variable and dynamically defines (asserts clauses for) two predicates, setNAME/1 and getNAME/1, where NAME is the atom Name or the atom corresponding to the string Name. The definitions are installed in the module in which make_gv/1 is called. These two predicates are used, respectively, to set or get the values of the global variable which was allocated. Here are some examples:

The underlying or primitive global variable mechanism is best described in terms of a simple implementation point of view. Global variables are value cells with the following properties: 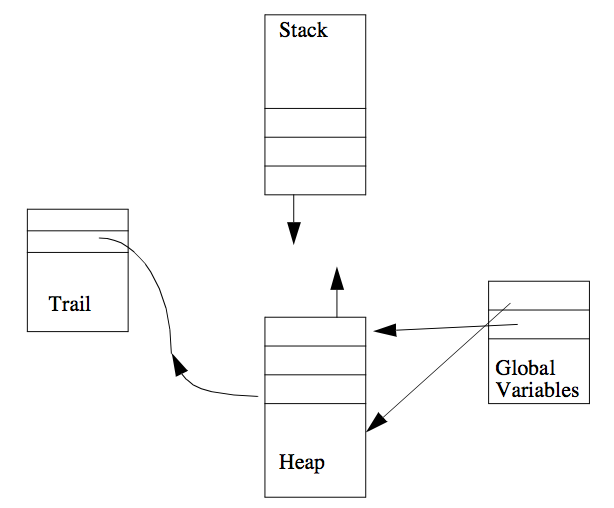 Figure. The Global Variables Area and the Heap.

The underlying mechanism is implemented by the following routines:

gv_free(Num) deallocates global variable number Num, after which Num can be reused by subsequent calls to gv_alloc/1.

Attempts to use gv_set(Num,Value) or gv_get(Num,Value) without a preceding call to gv_alloc(Num) returning a value for the variable Num is an error which will generally cause unpredictable behavior, including system crashes.

Here are some examples:

Note that gv_set/2 is a constant time operation so long as the second argument is an atom or integer. Otherwise, it requires time linearly proportional to the current depth of the choicepoint stack.

ALS Prolog provides a predicate which allows programs to destructively modify arguments of compound terms (or structures). This predicate is mangle/3. The effects of mangle/3 are destructive in the sense that they survive backtracking. The calling pattern for this predicate is similar to arg/3:

This call destructively modifies an argument of the compound term Structure in a spirit similar to Lisp’s rplaca and rplacd. Structure must be instantiated to a compound term with at least N arguments. The Nth argument of Structure will become NewArg. Lists are considered to be structures of arity two. NewArg must satisfy the restriction that NewArg is not itself an uninstatiated variable (though it can be a compound term containing uninstatiated variables). Modifications made to a structure by mangle/3 will survive failure and backtracking.

Even though mangle/3 implements destructive assignment in Prolog, it is not necessarily more efficient than copying a term. This is due to the extensive cleanup operation which ensures that the effects of a mangle/3 persist across failure. Here are some examples:

The allocation and use of hash tables is supported by exploiting the fact that the implementation of terms is such that a term is an array of (pointers to) its arguments. So hash tables are created by combining a term (created on the heap) together with access routines implemented using basic hashing techniques. The destructive update feature mangle/3 is used in an essential manner. As was the case with global variables, at bottom lies a primitive collection of mechanisms, over which is a more easily usable layer providing ‘named’ hash tables.

The predicate for creating named hash tables is

If Name is any atom, including a quoted atom, the goal make_hash_table(Name) will create a hash table together a set of access methods for that table. The atom Name will be used as the suffix to the names of all the hash table access methods. Suppose for the sake of the following discussion that Name is bound to the atom ‘_xamp_tbl’. Then the goal

Consider the following example (where we have omitted all of the ‘yes’ replies, but retained the ‘no’ replies):

The core hash tables are physically simply terms of the form

We are exploiting the fact that the implementation of terms is such that a term is an array of (pointers to) its arguments. So what makes a hash table a hash table below is the access routines implemented using basic hashing techniques. We also exploit the destructive update feature mangle/3. Each argument (entry) in a hash table here is a (pointer) to a list

where each Ei is a cons term of the form

The complete hash tables are terms of the form

The basic (non-multi) versions of these predicates overwrite existing key values; i.e., if Key-Value0 is already present in the table, then hash inserting Key-Value1 will cause the physical entry for Value0 to be physcially altered to become Value1 (using mangle/3).

The “-multi” versions of these predicates do NOT overwrite existing values, but instead treat the Key-___ cons items as tagged pushdown lists, so that if

was present, then after hash_multi_inserting Key-Value1, the Key part of the bucket looks like:

Key hashing is performed by the predicate hashN(Key,Size,Depth,Index).